The Spotted Gums of Mottle Range - before and after the fires

I’m not a plant person, but sometimes there is a species which commands your attention. In this case it is the Spotted Gum (Corymbia maculata). While it enjoyed spectacular success during the urban native planting craze of the 1970s, there is only one single spot in all of Victoria where this stately species grows naturally in a remarkable patch of forest.

Being very familiar with this species from my urban childhood, I was used to seeing planted specimens adorning shopping centre car parks, university campuses and other public spaces. It was the undisputed champion of tearing up footpaths and other paved surfaces. However, I wanted to see it in its natural habitat, without a brace of abandoned shopping trolleys at its base. The only place to do this in Victoria is at the Mottle Range in East Gippsland.

There is some conjecture as to the origin of this population. It is the most southerly in the world and well over 100 kilometres from the species’ nearest stronghold on the south coast of New South Wales. The overwhelming evidence suggests that it is a relict population from a different age. More facetious theories suggest someone may have dumped garden waste containing Spotted Gum seeds at the location long ago. I choose to believe the first theory.

I first saw these majestic trees in the autumn of 2009. Usually I am in search of animals which tend to move and hide and a sighting is never guaranteed. With these guys, it was a dead certainty. Armed with precise location notes, I travelled with a good friend under the amazing wooden trestle bridge at the hamlet of Wairewa and north into the ridgeline forests. Our stomachs were knotted with anticipation. Before long, we spied one spotted giant. Then another. And more, until there was a whole forest. 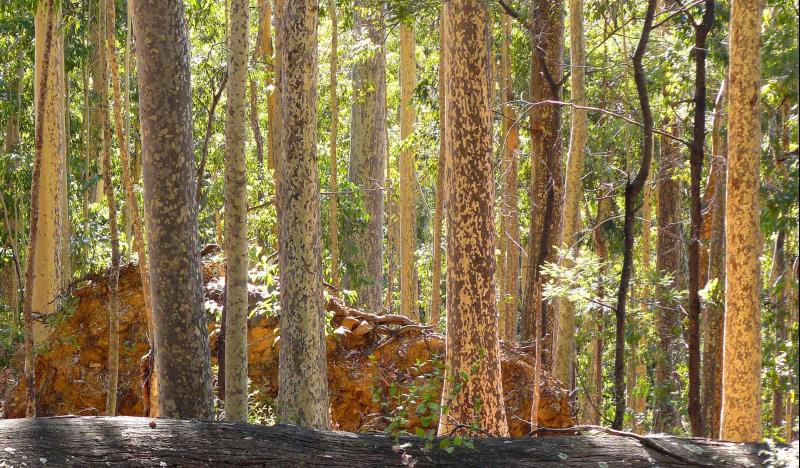 Before long, we spied one spotted giant. Then another. And more, until there was a whole forest.

The open canopy dispersed the autumn sun to highlight their dimpled and spotted trunks immaculately (or maculately, in this case). They grew on a steep north-facing slope where the deep leaf litter crunched with reverberating crispness with each footfall and the loose stones tried their best to wrench ankles from their joints. You could press your face against their steely cool trunks and look up into the canopy. And I swear you could feel a buzz. 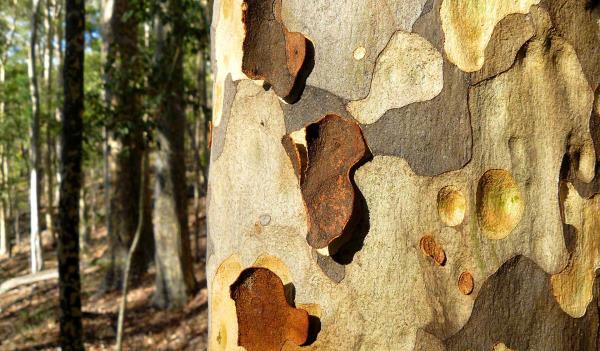 \
The open canopy dispersed the autumn sun to highlight their dimpled and spotted trunks immaculately. You could press your face against their steely cool trunks and look up into the canopy.

Fast forward to 2020. East Gippsland has been ravaged by wildfire. I am on the road again, this time with a different good friend but aiming for the same trees. From the start, the signs aren’t good. The trestle bridge at Wairewa is half burnt. The sign denoting the Mottle Range Road is prophetically blistered. The surrounding forests have had a hot burn. Our stomachs are knotted, but not with anticipation but rather dread.

I didn’t recognise the forest when we first arrived. The trunks of the trees were bleached white rather than spotted. It took a while to sink in that these were the same Spotted Gums of autumn 2009. The entire forest had suffered a hot crown burn. In a last act, resembling a death agony, the trees dropped all their scorched leaves and then blistered and shed their iconic spotted bark. Huge sheets and ribbons of spotted bark- the very identity of these trees- lay strewn across the ground. The deathly silence, bereft of any birdsong, was only broken by the sound of more bark dropping to the ashen ground. 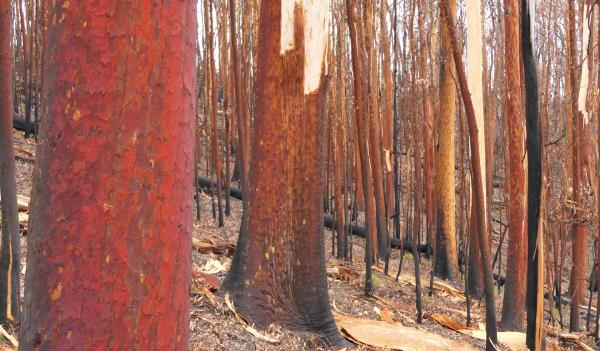 In a last act, resembling a death agony, the trees dropped all their scorched leaves and then blistered and shed their iconic spotted bark.

Huge sheets and ribbons of spotted bark - the very identity of these trees - lay strewn across the ground.

At this stage, it was hard to be positive. But after several minutes of trudging through devastation with head held down, a few meagre positives emerged. A very small percentage of trees (and interestingly only the young ones) had thrown up lipstick pink epicormic shoots from their bases. In a few other spots, tiny and fragile seedlings could be seen emerging from the ashes and tremulously reaching for the skies. The entire Victorian living population of Spotted Gums was within a metre of the ground and susceptible to ravenous introduced and native herbivores. Careful monitoring and management is needed if it is to persist. 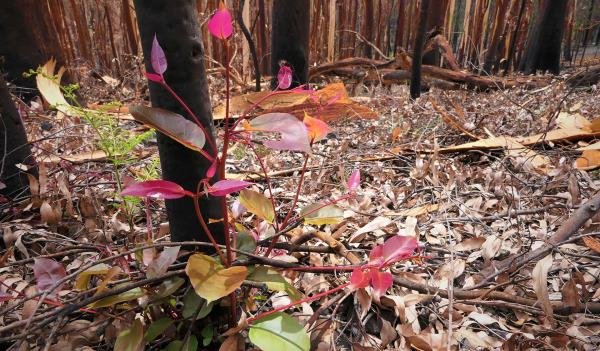 A very small percentage of trees had thrown up lipstick pink epicormic shoots from their bases. 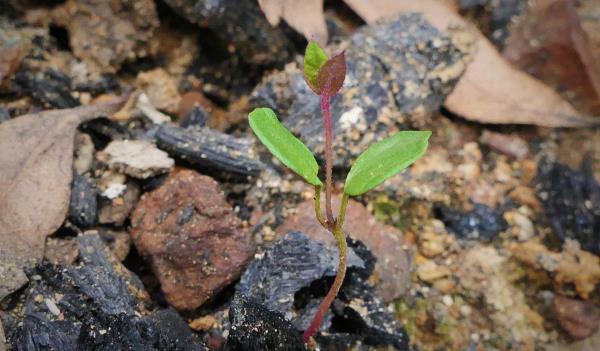 Tiny and fragile seedlings could be seen emerging from the ashes and tremulously reaching for the skies.

So, for the time being, it appears that the Spotted Gums will survive, albeit in diminished numbers. While this is nice to know, I also know that this forest will not be the same for many decades to come. It will be vulnerable. Should another fire occur before today’s seedlings are old enough to set seed, it may wipe the species out in Victoria. I hope this forest does survive and mature, so that in fifty years someone else may experience it on a sunny autumn afternoon, speculate about its origin, press their face to the trunks and feel the buzz.

I’m not a plant person, but I do admire their tenacity and I hope we give them enough of a chance to flourish. 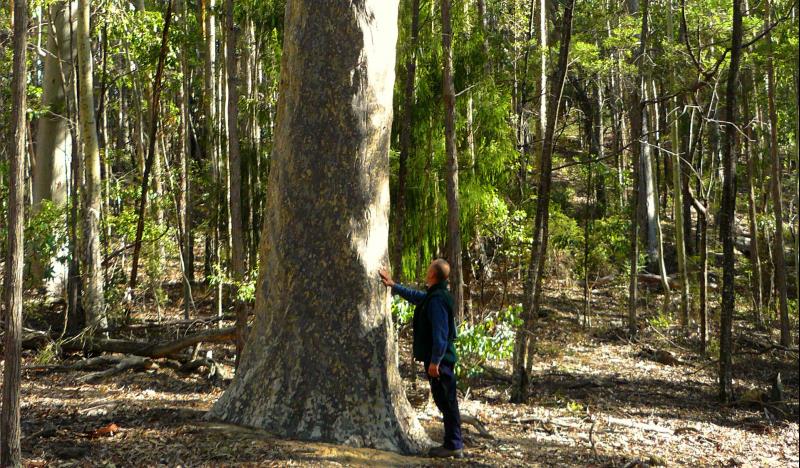