Seven Parks Victoria staff have received one of Australia’s top honours for their selfless acts of bravery during a severe flood at Wilson’s Promontory in 2011.

The Group Citation is awarded by the Governor-General for “a collective act of bravery, by a group of persons in extraordinary circumstances”.

START OF AN EXTRAORDINARY NIGHT

On March 22, 2011, more than 200 people were camped at Tidal River enjoying a late summer trip to one of Parks Victoria’s most popular sites.

A wet day was forecast, but nothing could prepare people for the downpour that hit the Prom. The rain simply didn’t stop, and only seemed to get heavier throughout the day.

As the evening began to set in, water inundated the campground and it was clear the situation was becoming serious. Parks’ emergency response was activated. People in remote locations were warned about the situation and urged to leave the park if they could.

Wilsons’ Promontory National Park Ranger in Charge Brett Mitchell set up an incident control centre with the Victoria Police at Yanakie, just outside the park boundary.

Meanwhile the rangers who were living at the campsite tried to make sure everyone was safe as the water rose further. 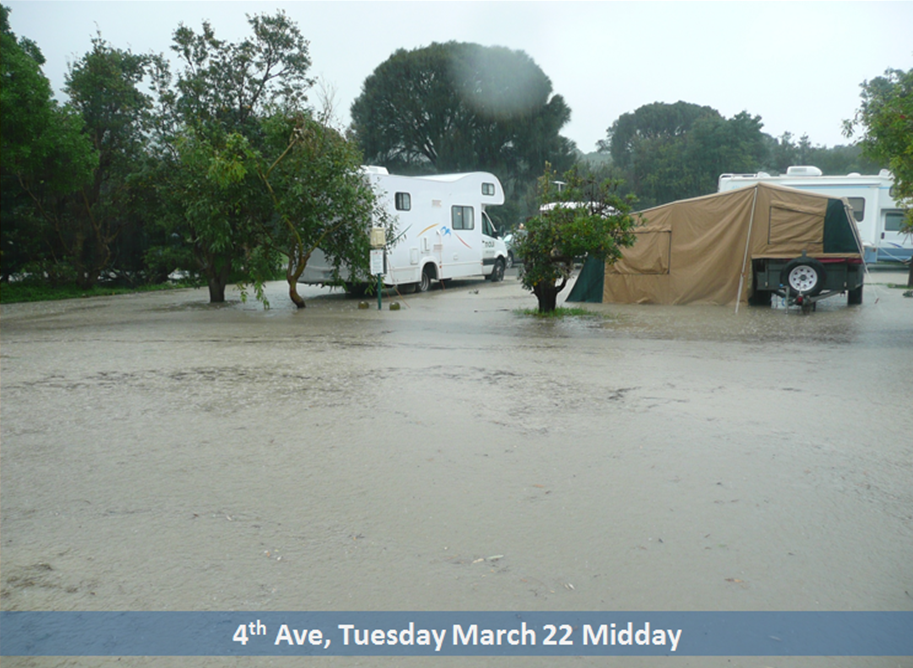 Heavy rain caused flooding in the Tidal River campground during the day, but this was nothing compared to what was to come. Credit: Parks Victoria

At around 9pm there was a sudden, violent surge - likely caused by a landslip downriver.  More than one metre of water streamed across the campsite, sending vehicles and debris everywhere.

The rangers, led by Duty Officer Darren Hill, worked together to evacuate visitors to higher ground, but it was not easy. At times, the water was above head height and desperate campers were scattered across the area.

Dave Bone’s 4x4 and the Tidal River tanker vehicle, driven by Steve Burns, quickly became a route to safety for many. Dave recalled:

“Driving over to the main car park, a mum and her two boys quickly jumped in with me, filling the cab with water. I’ve no idea how many people climbed on the back, except that it was a lot. Heading for dry ground along Second Avenue, the water level was now over the bonnet, totally obscuring the lights.”

On foot, Jack Schulz rescued another ten people, including a mum and baby, from the flooded general store.

“The front doors were smashed in and water was pouring into the building, along with a number of posts and other debris. I then realised there were people inside, one was a young mother and a week-old baby … I got the young mother and baby and helped her out as there was a lot of debris. I then escorted the others outside to the rear of the shop onto higher ground.”

Danny Hudson and Darren Hill tried to drive one of the Parks utes across the campground to assist with the evacuation. Despite finding it flooded with water up to the steering wheel, the ute started, but it soon lost traction and started to float and spin. As it did so, the central locking engaged and they feared they would be trapped, but the electric windows somehow still worked and they managed to climb out to safety.

Danny headed for the inundated cabins and eco-lodges to make sure nobody was still inside.

“I was running along, banging on doors,” he recalled. “As I got to the last cabin I heard some voices yelling out to me. I was up to my neck in water. All I had was my phone light. There was a metre of water in the cabin, and a really elderly couple in there standing on the kitchen bench. The husband and I got the elderly lady, on tip-toes to keep above water … I got them out to a relatively safe spot.”

Melissa Moon met Danny and together they rescued another family from the cabins.

“Danny and I waded our way along the various tracks throughout the cabin precinct calling out and listening for responses over the sound of the fast-flowing water.” Melissa recalled. “After searching for a while it appeared that most people had managed to get out and seek higher ground, however, we did find one last family still huddled together on the top bunk of their cabin.”

After his own narrow escape from the ute, Darren rescued a group of elderly campers sheltering in a flooded van.

“The water was just below mattress level. They gathered some dry bedding and I escorted them out of the van and along Third Avenue to the George Robinson group lodge where people were gathering.”

Meanwhile, a group of SES personnel had managed to reach Tidal River in a ute, but a second truck with them had got stuck in the flood waters north of the campground. Steve Burns drove the fire tanker out to rescue them.

“When we arrived, we found the SES truck stuck between a large stand of eucalypts that had fallen from the edge of the steep road. Most of the trees would have been decades old with very large root structures … the ground had just given way and the trees toppled over.”

Using a chainsaw, their own strength and the fire tanker’s tow chain, Steve and the SES personnel were able to cut a way through the fallen trees and get the crew to safety.

The campsite was a surreal place that night. Cars and caravans were picked up by the force of the water and joined the debris. Dave Bone recalled seeing a caravan floating down Third Avenue.

“Its owner was hanging on to a handle on the rear corner in a futile attempt to steer it - to where I don’t know. He looked like he had no intentions of letting go, so I physically had to get a hold of him by the collar and say “it’s time to go”.

Everyone who could was taking shelter in the huts that remained above the water, fuelled by a strong community spirit.

Melissa recalled, “The guests who were not flooded out of their accommodation kindly opened their doors to all of our displaced visitors. I recall walking in the door of the George Robinson group lodge and just seeing people sleeping in hallways, on couches and basically anywhere that there was clear floor space out of the weather. The ladies who had booked the lodge were busy making cups of tea for the cold and weary. The scene in [the other buildings] was much the same” 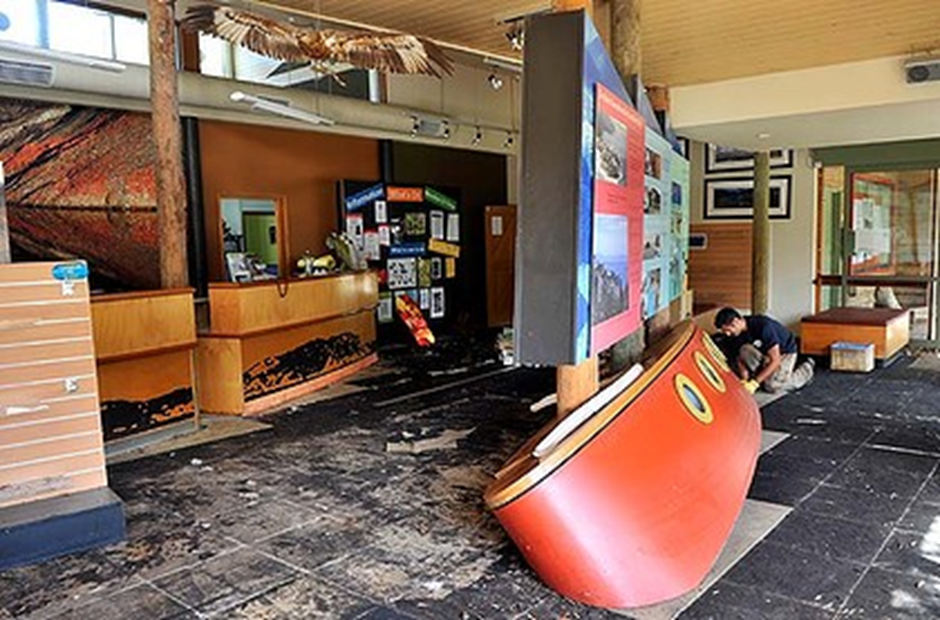 In the morning, Steve Burns discovered the rainfall gauge at the campsite had recorded more than 377mm – the highest recorded day’s rain in Victorian history.

Cars, caravans, tents and debris were strewn across the campground

But remarkably, thanks to the actions of the rangers, there was no loss of life.

While the flood water started to recede, Brett Mitchell and the emergency services at Yanakie realised the campsite would have to be evacuated by air, after the Darby Road bridge – the only route into Tidal River – was washed out.

The ensuing airlift was the biggest in Australia since Cyclone Tracey in 1974. More than 300 people were rescued from Tidal River and the wider Wilsons Promontory National Park on a series of helicopter flights. Melissa recalled:

“It was my job to compile flight manifests for each load of evacuees, 18 per flight from memory, being flown out of Tidal River, one copy for the pilot and another for our records. It took two days to fly all of the evacuees out of Tidal River, with two helicopters doing continuous trips between the Norman Beach Car Park and the Yanakie Airbase.”

Darren Hill was also involved in the airlift and recalled seeing the scale of the damage caused across the Prom from the air. “It was only then that I really understood the enormity of it – I never expected to see the scale of the damage. There were landslips at Mt Oberon and the road was completely washed out.”

And after that extraordinary effort, the clean-up began.

“The weeks and months that followed were a lengthy process of cleaning up, rebuilding and lots of challenging work,” Steve Burns recalled. “But despite facing the full wrath of mother nature the park was reopened to visitors and we all carried on with business as usual.” 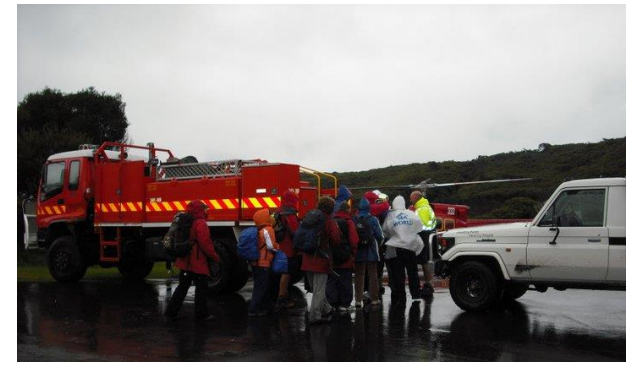 The airlift in progress during the days after the flood. The fire truck is the Tidal River tanker driven by Steve Burns on the night of 22 March. Credit: Parks Victoria.

As the group received their award earlier this month, memories of the flood and the days that followed remain strong for everyone involved.

“I’m sure I will be telling the story for years to come,” said Melissa Moon.

For Dave Bone, the magnitude of the flood certainly took a long time to sink in. “So too did the fact that we’d pulled off the largest airlift in Australian peace time history without injury or loss of life. I now work for Alberta Parks in Canada, and while working in the Rockies in June of 2013, it happened again!”

And for Steve, “I can honestly say from facing bushfires, storms, floods and other natural disasters in my career with the Victorian State Government, Parks Victoria and with the Emergency Services, the power of nature and the destruction it can cause and yet how it brings people together to help one another in difficult times will never cease to amaze me.”