One year on: the challenging recovery from catastrophic storms

“As Park Rangers we have been confronted by widespread unprecedented challenges in the wake of last year’s catastrophic storms, and despite the enormity and on-going complexities of the recovery task, a power of work has been achieved to ensure our parks are safe for people to experience and enjoy.”
- Matthew Hoogland, Area Chief Ranger, Dandenong Ranges National Park, reflecting on storm recovery efforts this past year.
More than 50 parks and sites across Victoria were crunched by a major storm event in June 2021, resulting in park closures from damage on a scale rarely seen.
The thousands of fallen trees and scattered debris, combined with landslips, flooding, erosion and damaged powerlines created widespread damage and dangerous conditions.
Mother Nature then doubled-down, with severe storms hitting many areas again in October, while flooding has since caused further damage in parks, namely in parts of Gippsland. 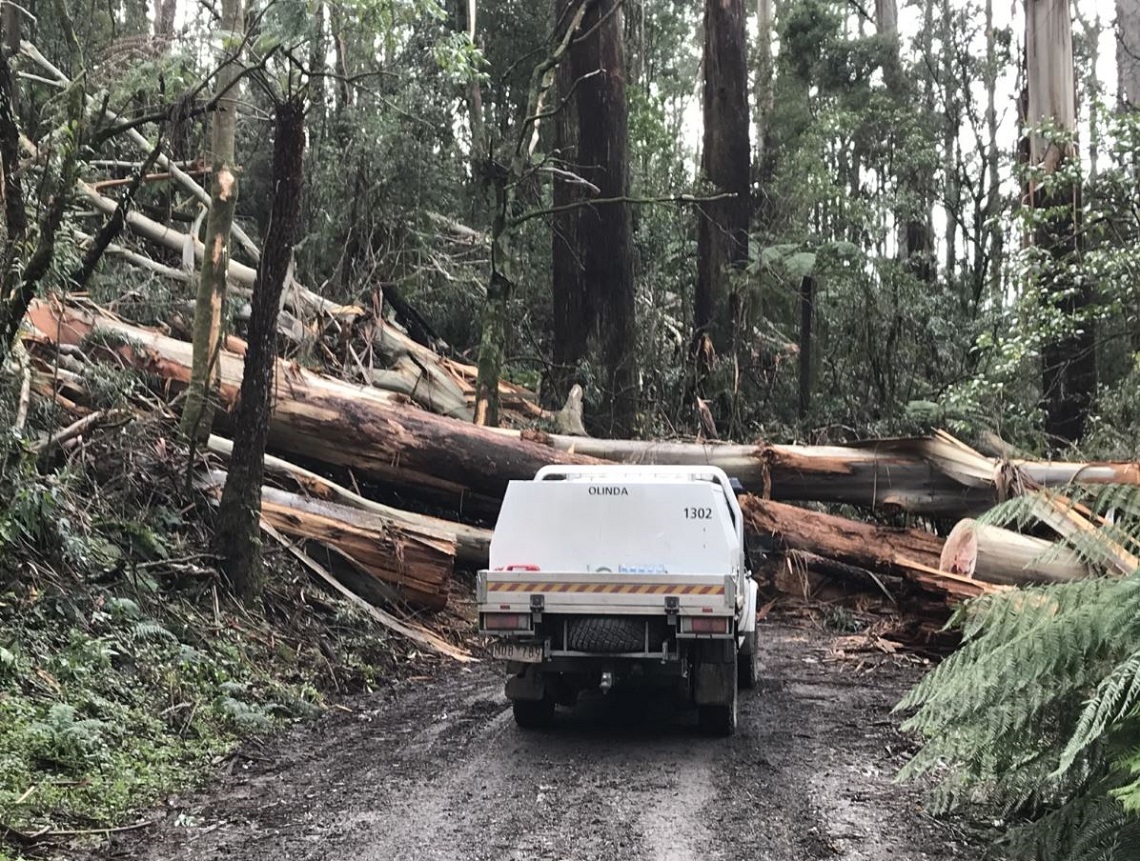 A major clean-up and recovery operation

Some three million hectares of land were impacted by heavy rainfall, flash flooding and high winds last June and October. Over the two days in June, rainfall totals of 100mm to 300mm fell across a third of the state.


Among the areas most affected included Wombat State Forest, Macedon Regional Park, the Yarra and Dandenong Ranges, Gippsland and parts of western Victoria and the Mornington Peninsula.
Extensive recovery work has been ongoing these past 12-months, and of the 52 parks and sites impacted last June, just two remain entirely closed to ensure public safety.
Access has been restored to dozens of roads, walking trails, gardens, camping spots and picnic areas, with all parks impacted last October re-opened as of earlier this year. 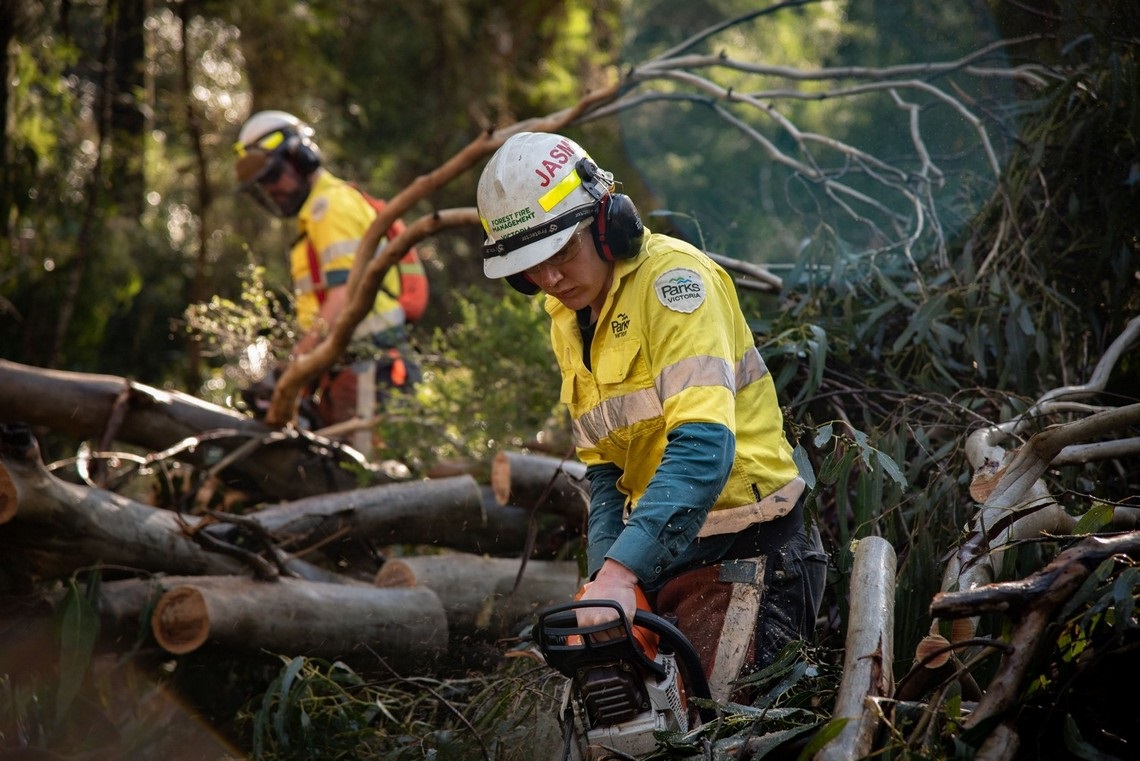 Storm clean-up and recovery has been a big task at parks and reserves.


Safety a key focus of storm recovery
In recent years, Park Rangers have faced on-going challenges to repair damage and make our parks safe, namely in the wake of the tragic 2019-20 summer fires, storms and recent flooding.
Subsequent recovery programs have required a strategic and sustained approach, with a particular focus on prioritising safety for Parks Victoria staff and the public, and minimising any further impacts on the land through the recovery work itself.
Park Rangers have needed to carefully consider a number of factors depending on the complexities of the recovery task, including insurance processes, cultural heritage and environmental assessments to protect the significance of a site, procurement of specialist advice, and tender processes to secure appropriate design and reconstruction contractors.
It’s work that can take considerable time, and which varies depending on the scale of damage, the location and the level of work and planning required. This is important work, and Parks Victoria takes the necessary time to get things right – the health and safety of our parks, our visitors and our staff is the priority.


Tracks and roads cleared, visitor sites re-open
Despite its complexities, the extensive storm recovery program in the past 12-months has seen work to assess, identify and clear thousands of hazardous trees, rocks and tonnes of debris to restore access to walking tracks, roads, amenity blocks and visitor sites.
Hundreds of kilometres of roads, trails, fences, boardwalks, crossings and fire access tracks have been checked and cleared.
Park Rangers have been at the forefront of recovery efforts, and immediately after the storms struck, they assisted communities with clean up and fulfilled critical on-the-ground emergency roles.
As storm recovery works progress, Parks Victoria continues to explore sustainable ways of re-using damaged trees and timber when it cannot safely remain where it fell. 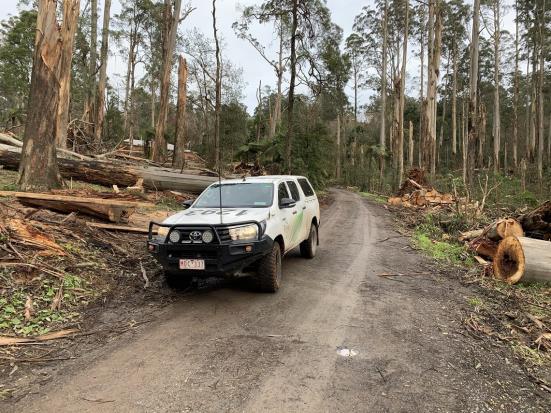 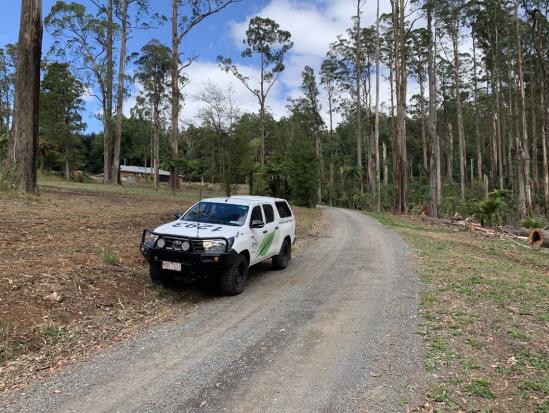 Before and after: Storm damage around Mt Dandenong Primary School was cleared so the school could reopen and to ensure fire preparedness.


Below is a snapshot of storm recovery works within some of the most affected areas these past 12-months.

Please remember to check for any updated changes affecting the park you intend to visit by going directly to the individual park page on the Parks Victoria website. You can also visit the Safety in Nature page or contact the Parks Victoria Information Centre on 13 1963.

Yarra and Dandenong Ranges
The Yarra and Dandenong Ranges were among the hardest hit regions in last year’s storms.
Some 450 hectares of public land was affected, with entire areas of forest flattened. In the most heavily impacted areas less than 10 per cent of the original canopy was retained.
Fallen trees caused significant damage to buildings, trails, reserves, bridges and boardwalks. Many fire-access tracks have since been cleared to enable safe and rapid response for emergency vehicles.
Across the region, more than 180kms of hazardous trees and roadside debris have been assessed, and some 160kms of roads re-opened.
Storm recovery works have recently seen the 13km Silvan mountain bike trails re-opened, as well as fuel break clearing finalised at Singleton Reserve, and access restored to Sherbrooke Falls. Significant recovery operations are underway at multiple sites including William Ricketts Sanctuary car park and bush reserve, Dandenong Ranges Botanic Garden, Mt Dandenong Arboretum and Olinda Falls. The re-opening of the iconic Kokoda Track Memorial Walk (1000 Steps) is also a step closer with repairs soon to start on the remaining sections of track. 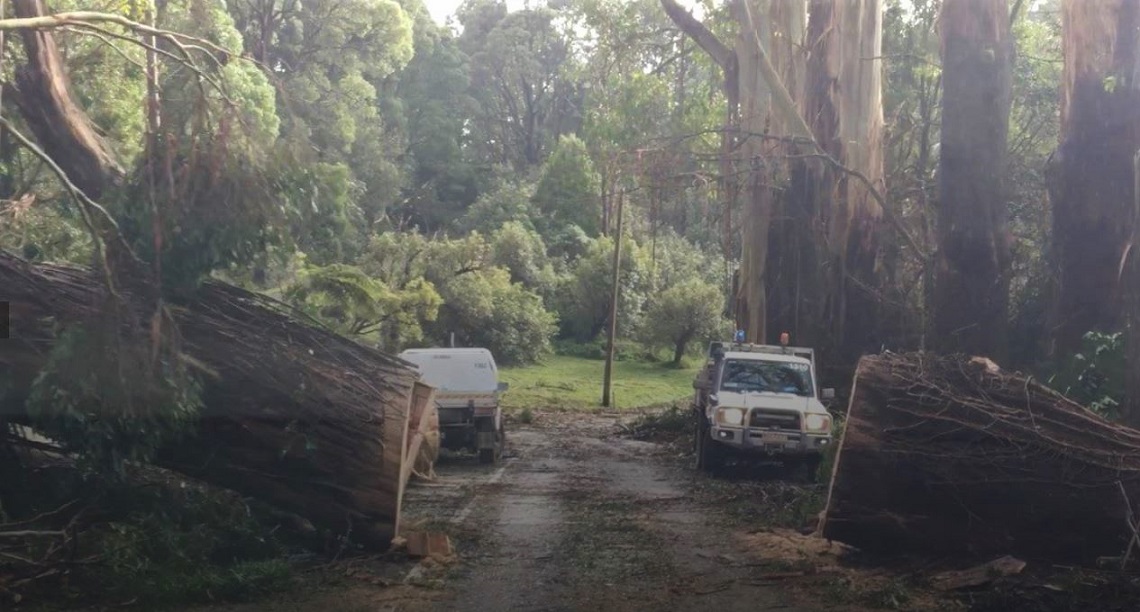 This large fallen tree shows the enormity of the recovery task in the Dandenongs.


Macedon Ranges
Parks Victoria staff faced a mammoth and complex recovery task after wild weather felled thousands of trees leading to the closure of Macedon Regional Park and the popular Trentham Falls.
Specialist assessment and treatment of hazardous trees was required to make safe visitor areas and reopen sites. The recovery task has been substantial with crews working across about 200kms of roads, walking tracks and picnic grounds to carefully clear hundreds of large fallen and hazardous trees.
Notably, a popular section of walking trail between Bawden Road and the Mount Macedon War Memorial Cross was re-opened in time for ANZAC Day this year. Work continues to progress at locations within the Macedon and Hepburn regional parks, and at Lerderderg State Park.
“We have been conscious of wanting to restore access to as many trails and visitor sites as soon as it was safe to do so, and teams have worked hard to find the best possible solutions. It has been a real team effort, with Park Rangers working alongside other agencies and specialist contractors,” said Jodi Heath, District Manager, Western Basalt District. 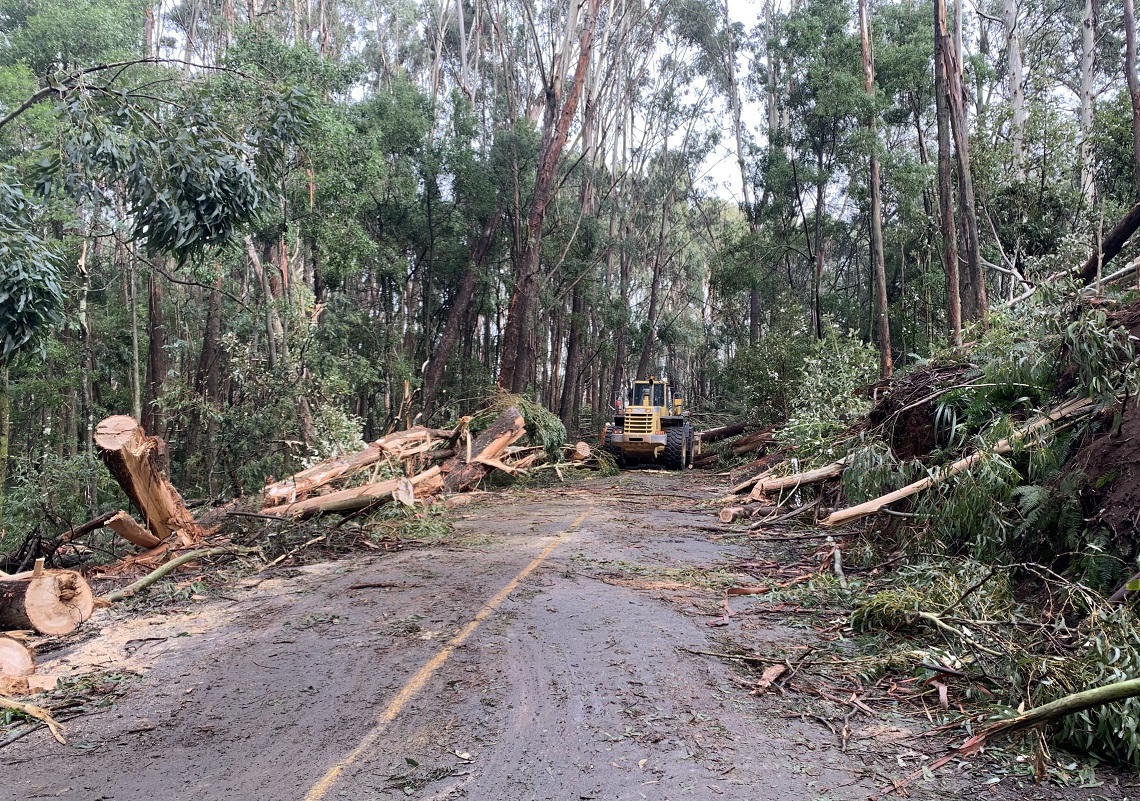 Clearing roads and tracks at Macedon Regional Park has been a mammoth, complex task.

Kinglake National Park
Located on the northern fringes of metropolitan Melbourne, on the slopes of the Great Dividing Range, Kinglake National Park suffered widespread storm damage in June 2021.
Flash flooding damaged roads, crossings and drainage while vast areas of mature, large trees were toppled by strong winds, blocking walking tracks, roads and fuel breaks.
Impacted sites included the Mountain Creek bridge, Masons Falls picnic area which is open and the popular Wombelano Falls, where Park Rangers have since been able to re-open the walking track and viewing platform. Crews aided by excavators cleared some 35kms of roads, before the fire season to enable emergency vehicle access. 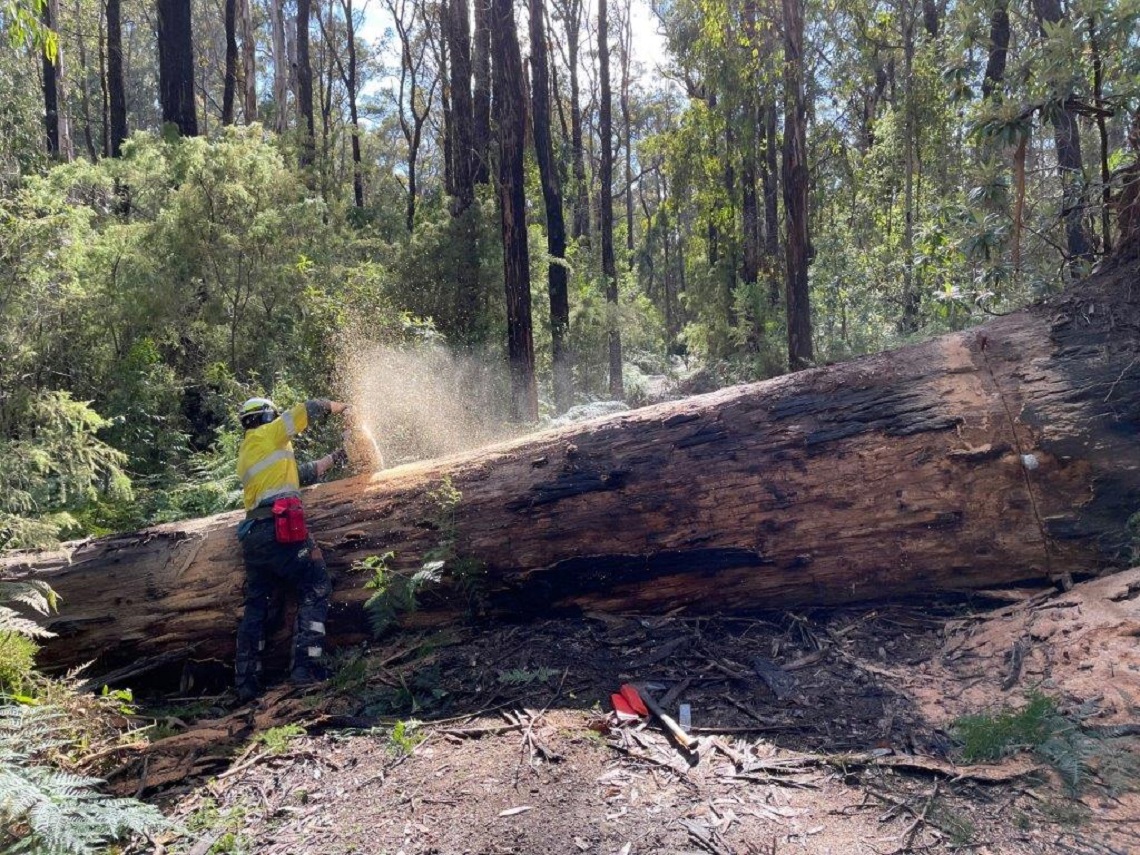 Gippsland
Multiple storm and flood events in the past 12 months have caused widespread damage to the track and trail network, campgrounds and visitor sites across the Gippsland region.
At Wilsons Promontory National Park, wind gusts of up to 115km per hour hit, and erosion and tree hazards affected some of the park’s 190kms network of walking tracks.
Following extensive recovery work, many tracks and camping sites have re-opened, and planning is underway to repair the badly damaged Sealers Cove boardwalk. This walk needs its entire two kilometres of boardwalk replaced, with its remote location making the recovery task challenging and labour-intensive.  As part of make-safe works, careful consideration is being given to how this track is repaired as the hydrology in the area has changed in recent years. 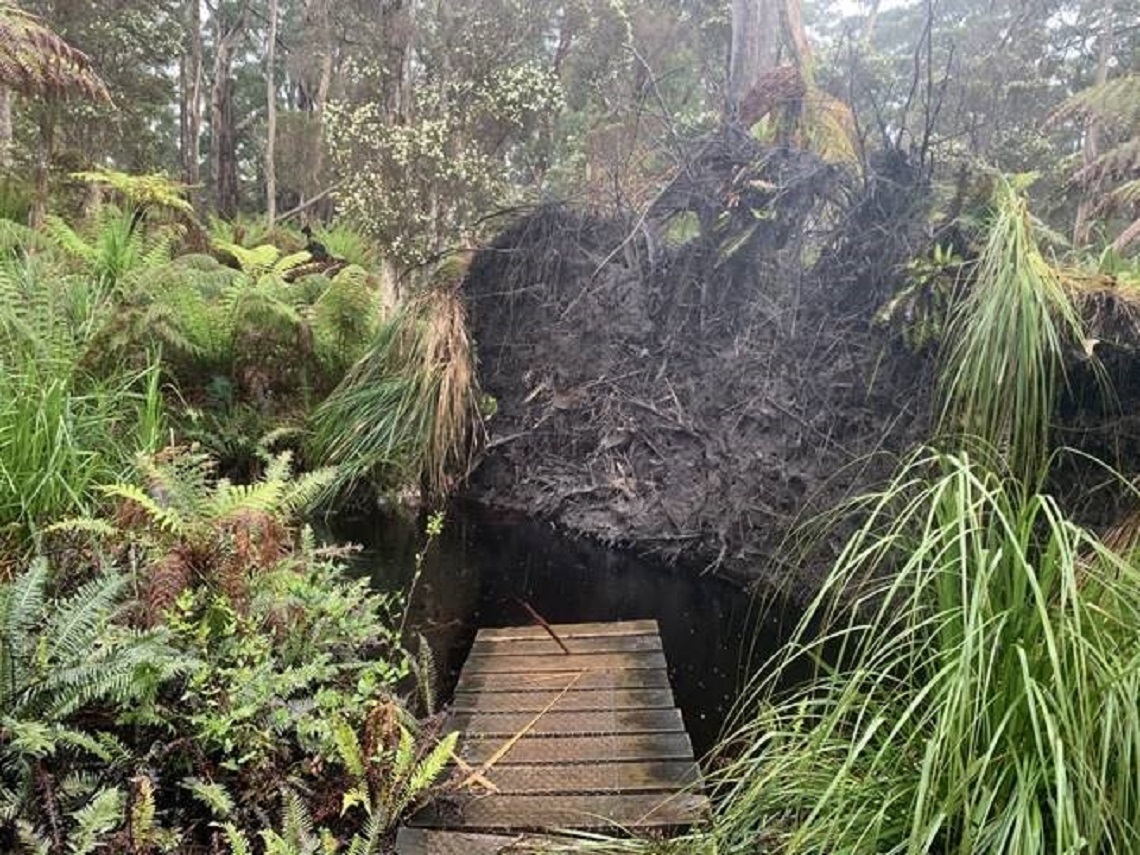 The wild weather has caused landslips, coastal erosion, washed away tracks and had widespread impact on many assets including bridges, amenities, crossings and visitor sites. In some areas, flooding exceeded previous levels dating back over a decade.

In Central Gippsland, recovery works continue in light of extensive flooding and storm impacts, with some 80km of tracks assessed and treated for hazardous trees by specialist arborists. 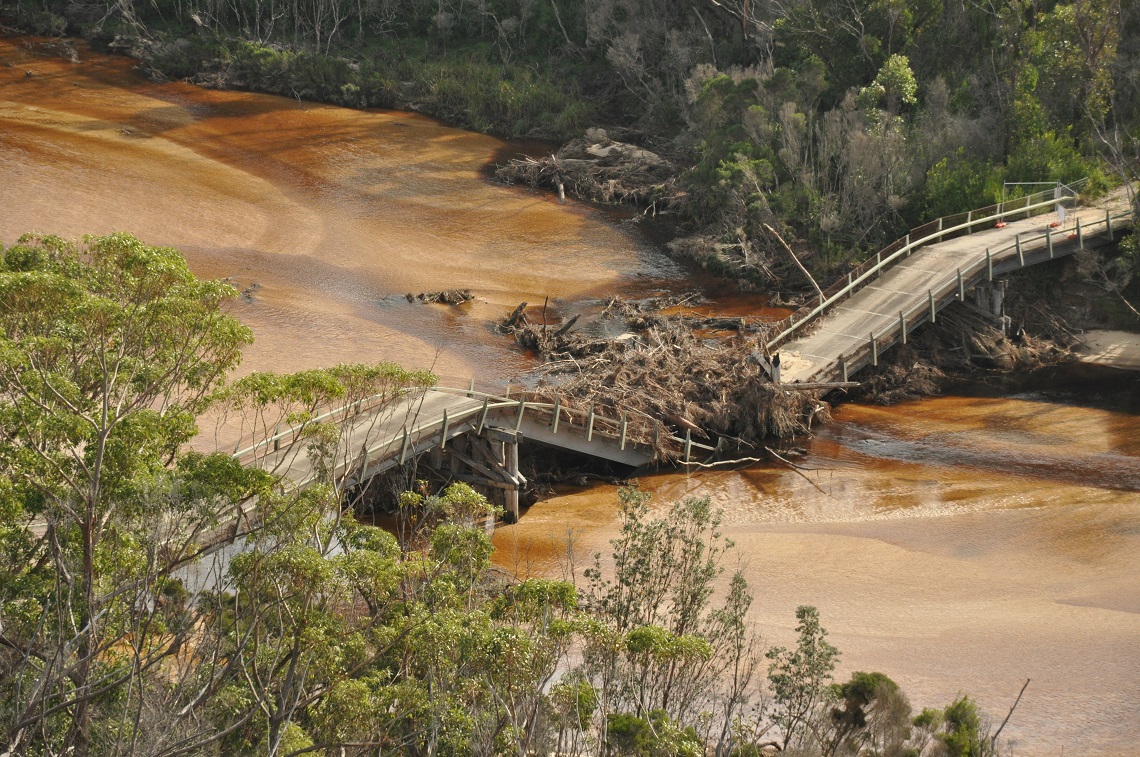 Recovery works have continued along the Great Ocean Walk, which saw a 14km stretch between Johanna Beach to Ryans Den reopened this year following two months of storm repair works.
Boulders and large fallen trees had to be cleared after a section of rock cliff subsided. The iconic walk is now fully re-opened between Apollo Bay and the Twelve Apostles.
Hikers also can enjoy once again the scenic Triplet Falls loop walk at Great Otway National Park.
The recovery task to repair the walk’s boardwalk and safety handrailing was a complex process that first required the walk to be cleared of debris, branches and fallen timber. Damaged and bent sections of the boardwalk then had to be removed for repair and reinstalled, while handrailing was replaced, welded or reshaped. Fortunately, rangers were able to maintain public access to the elevated waterfall viewing platforms while the loop walk was closed for repair. 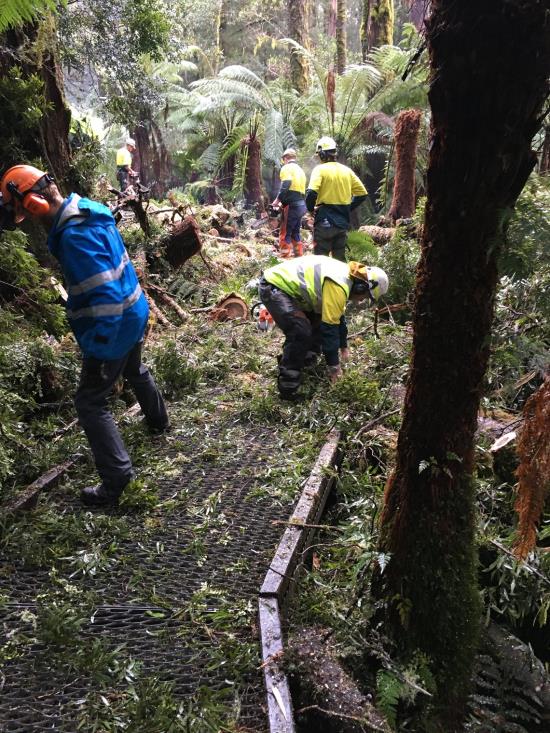 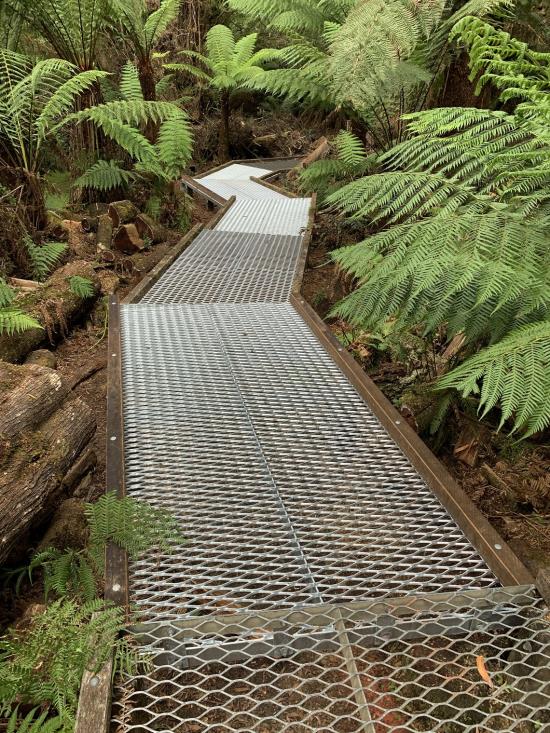 Before and after: Crews carefully cleared and repaired the Triplet Falls loop boardwalk

Port Phillip, Western Port, Mornington Peninsula
Storms hit many of Melbourne’s marine and maritime assets, and sites affected included Altona Pier, Lagoon Pier at Port Melbourne, St Kilda Breakwater, Anchorage Marina at Williamstown and St Kilda Pier. Buoys and navigation markers were impacted, and many small vessels were grounded as a result of the June storms.
Other areas impacted included Mornington Peninsula, particularly Arthurs Seat, with visitor sites such as boardwalks and BBQs damaged. Mountain bike tracks have since re-opened and, at the nearby popular Seawinds Garden, fallen trees and branches have been cleared and access restored. Work has also been required at Point Nepean National Park, Braeside Park, Lysterfield Park and Churchill National Park. The enormous recovery task continues to progress with access since restored at many sites across the region.