The coastline is formed from the remains of a massive volcano that has spewed forth lava over the last million years, cooling into hard basalt rock. The Marine National Park is part of the largest coastal basalt formation in western Victoria and experiences one of the highest wave energy environments in the State. It has rocky habitats of complex forms interspersed by plains of sand winnowed into symmetrical ridges by the endless movement of the water.

The seafloor of the area reflects this dynamic history.  Intertidal and near-shore reefs formed from basalt border the park.  In deep water (30-60 metres) within the park, there are low profile reefs formed from ancient shorelines or dunes when the sea levels were much lower than today sometimes capped by volcanic basalt.  These reefs are covered in rich sponge 'gardens', composed of thick growths of sessile invertebrates including sponges, ascidians, bryozoans and gorgonians.

The rich sea-life is derived in part from cold nutrient-rich water associated with the Bonney Upwelling sucked up towards the surface by offshore winds and currents during summer.  This water encourages the growth of microscopic plants and animals, providing a feast for fish, whales, penguins, and seafloor life such as sea-fans, sea-mosses and hydroids, sponges, and sea-squirts.

The connection to the Great Australian Bight and the Southern Ocean is highlighted by the regular visits of Southern Right and Humpback Whales that migrate north from Antarctic waters in winter to breed, and Australian Fur Seals foraging from the nearby colony on Cape Bridgewater. Blue whales, the largest of all creatures to have ever lived, also regularly visit these waters during summer. Discover local marine life in the rockpools and on the intertidal reef at Whites Beach, the most accessible part of Discovery Bay Marine National Park. 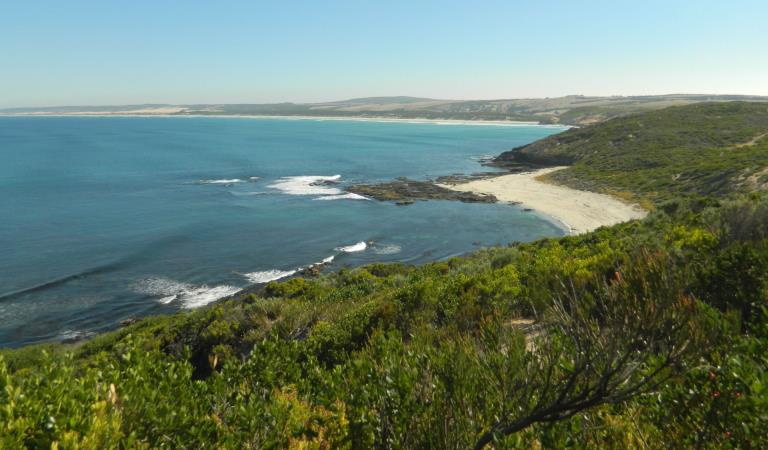 View Discovery Bay Marine National Park from headlands and cliffs long the Great Southwest Walk track and keep your eye out for passing whales including Blue Whales, frolicking Australian Fur Seals and the many seabirds such as Australasian Gannets that forage in this area.

This remote section of coast is very popular for beach goers, surfers, and snorkellers during the summer months. During late August to March the Hooded Plover, one of Victoria’s most threatened bird species, breeds on the beaches of the Discovery Bay Marine National Park so please give them space when using the beach.

Between October and March also keep an eye out for Blue Whales that can sometimes be seen from cliffs and headlands along this coast.

Autumn can be a great time to visit the coast when there are less people and often calm weather. The Cape Bridgewater Australian Fur Seal colony is a nearby highlight and is significant for the  Marine National Park as these animals often forage in the park.

Keep an eye out for Southern Right and Humpback Whales that can be seen during the cooler months from cliffs along the Great Southwest Walk trails.

Spring flowers brighten up the coastal heathlands above the park while in the water new growth for marine plants gets underway.

Be aware of the changing tides while exploring as some points of the park are not passable at high tide.

Diving should only be undertaken by trained and experienced divers. Beware of strong currents and undertows when snorkelling or swimming at the beach.

The management plan for Discovery Bay Marine National Park directs management for the park until it is reviewed.