Along the coast of Yallock-Bulluk Marine and Coastal Park, stretching from San Remo to Inverloch, the waves are unearthing precious relics that have lain buried in the rock for millions of years. This stretch of coastline is home to some of the richest fossil sites in Australia, and here, new clues from the distant past are constantly surfacing.

While the first dinosaur bone to be discovered in Australia was found at Eagles Nest in 1903, the sites of the most recent fossil discoveries are The Caves and Flat Rocks, both just outside of Inverloch. Flat Rocks is particularly significant – this intertidal zone was revealed to a team of researchers in 1991 in a stroke of weather-borne luck.

“We were just very fortunate to be prospecting that area,” says Lesley Kool, co-ordinator of the Dinosaur Dreaming project, a joint initiative between Monash University and Museum Victoria. “There’d been a storm the day before and all the sand which is normally on the shore platform had been washed off and had exposed this beautiful vista of sedimentary rock which had about 20 bones exposed on the surface. That’s something we had never found anywhere along the Victorian south coast.” 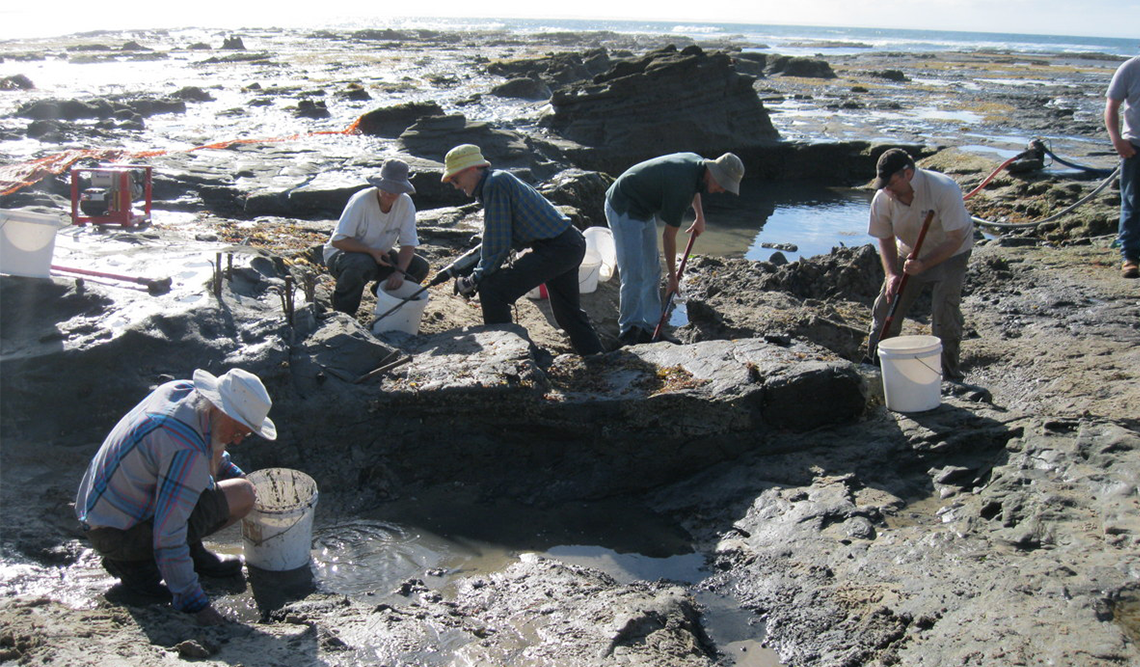 Flat Rocks is now widely accepted as the richest fossil layer of early Cretaceous specimens in Victoria. Since 1994, the research team has taken out more than 20,000 bones, from 40cm-long ankylosaurus ribs, enormous carnivore claws, and dinner plate-sized turtle shells all the way down to ancient wishbones and tiny teeth. Many of these finds have had major international implications, including evidence of some of the earliest existing mammals: tiny, shrew-like creatures who lived alongside dinosaurs 126 million years ago.

At the time these tiny animals scampered the earth, the south coast of Victoria was firmly joined to Antarctica inside the polar circle – you could have walked to Antarctica from Inverloch. Researchers are still trying to find out how the prehistoric inhabitants of this extreme climate, both mammal and dinosaur, managed to survive dark, freezing winters when the sun wouldn’t rise for six weeks.

Fortunately, more and more clues continue to emerge from the rock in Yallock-Bulluck Marine and Coastal Park. “The beauty of the Bass Coast,” says Lesley, “is that it’s so dynamic. Erosion is occurring all the time, and new bones are being exposed all the time.” 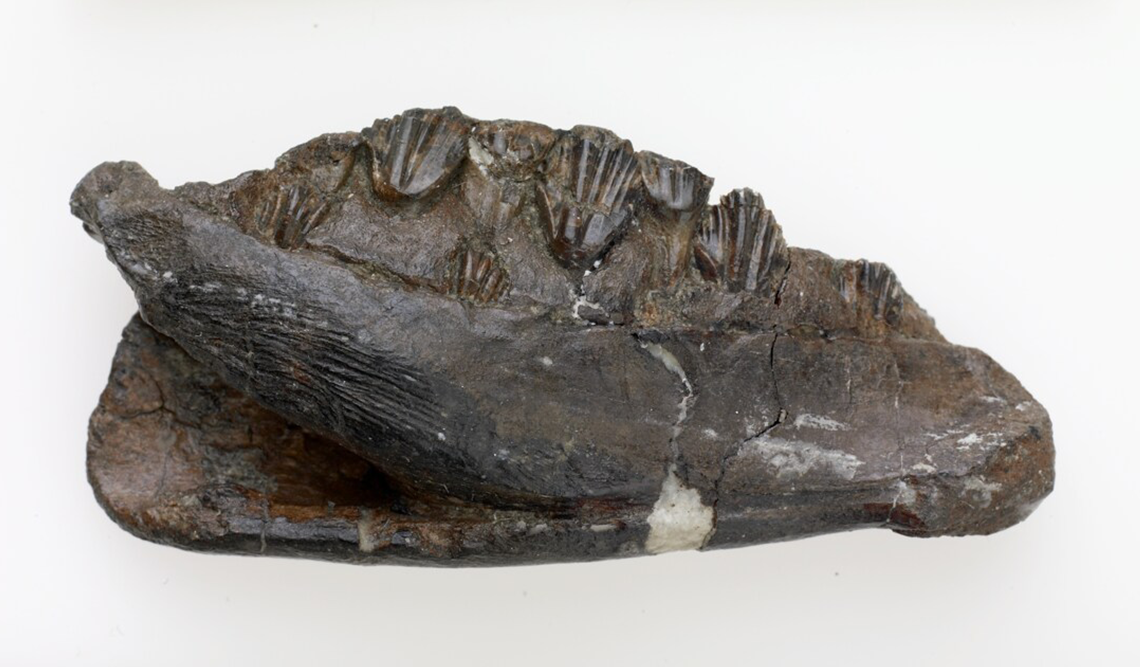 Because of this ongoing erosion, researchers can often be found checking the various dig sites for new finds. During the summer months visitors to the park can join in, with activities run at The Caves and Flat Rocks by the Bunurong Environment Centre. You can learn how to recognise fossils, what to do if you find one, and where you can see evidence of the region’s prehistoric past – look especially for the hard-to-spot but amazing dinosaur footprints visible in the rock platforms.

It’s not just fossils that make the Flat Rocks site special for park visitors. According to Parks Victoria Ranger Brian Martin, “It’s a popular location when the weather’s nice for snorkelling, and quite a few people scuba dive there. Because of the extensive intertidal rock platform, it’s also a really popular place for rock pooling and looking at all the different critters that inhabit the rockpools.” 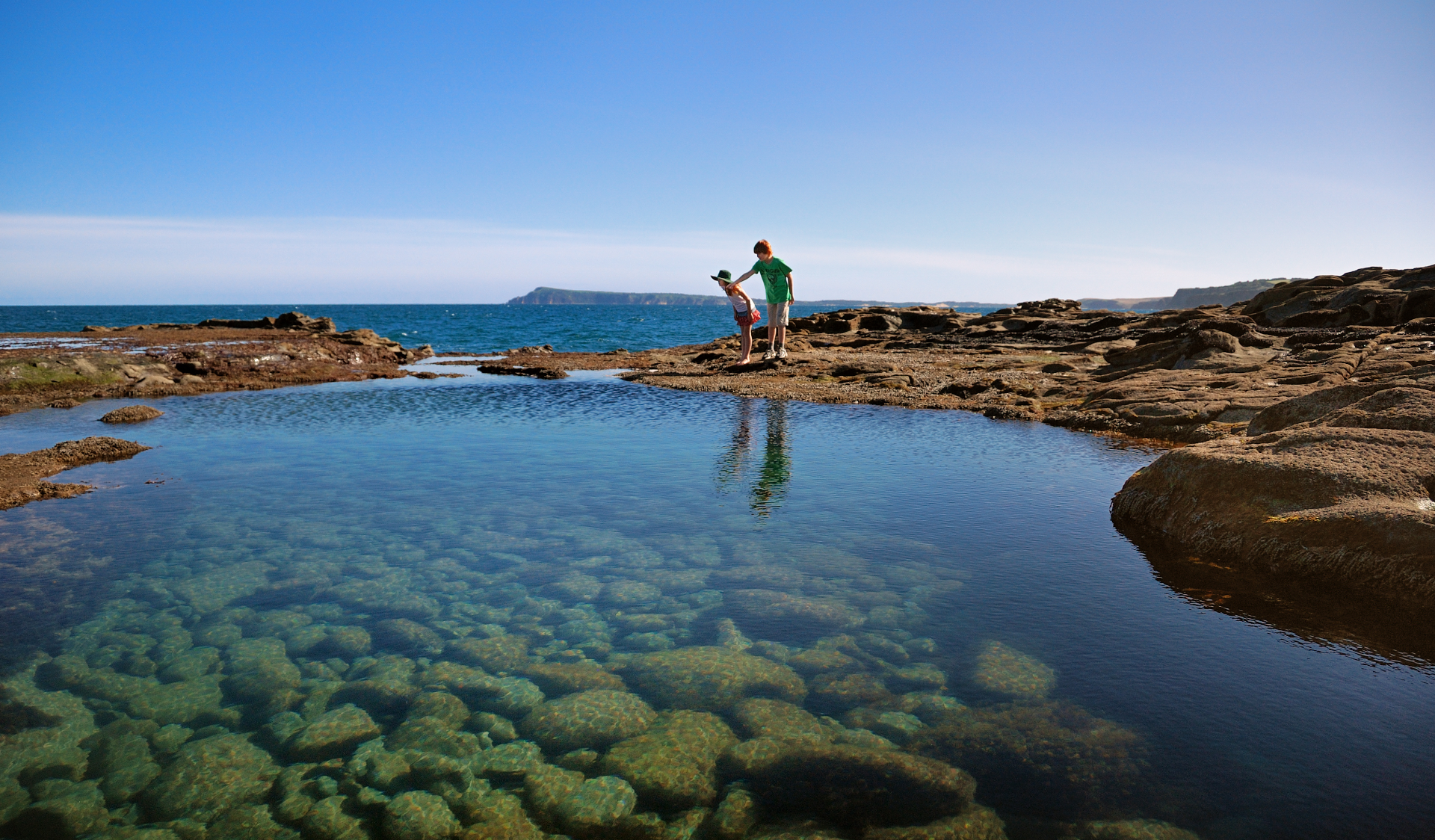 And if it’s fossils you’re set on, you can encounter them throughout the coastal park. “There’s other locations along the whole coastline,” says Brian, “right round towards Cape Patterson, around the Powlett River area, Kilcunda, and even around Punchbowl at San Remo where they also prospect for fossil bones.”

A visit to Yallock-Bulluk Marine and Coastal Park along the Bass Coast is an opportunity to explore nature’s stories, learn something new and literally watch history emerge from the earth. As you take a journey along sections of the park’s George Bass Coast Walk, you take a walk through time – and, maybe, towards new discoveries.