The reefs here are among Victoria's most interesting and beautiful, but were a deadly concern to early sailors who pressured the Government into constructing the lighthouse that still dominates the cliff tops. Fortunately today, these underwater crags can be admired for their stunning sea-life.

The subtidal reef consists of highly exposed granite slopes, boulders, rock gullies and outcrops and includes shallow reefs, as well as deep reefs that extend below 80m depth. Eastern temperate and southern cosmopolitan species co-occur, as a result of the mixing of warm eastern and cool southern waters.

Diving around Whaleback Rock or Sensation Reef is a truly amazing experience. The water is often very clear, with sunlight glinting off schools of silver fish. As you drift down, you feel dwarfed by massive granite boulders. A forest of gently swaying brown seaweeds hides a seafloor where orange, red, purple, pink, and white sponges and other invertebrates intertwine in intricate and beautiful patterns.

Many other creatures are visible between the sponges, under rocks and poking out of the seaweed holdfasts. There are brightly coloured sea-stars, brittle stars, abalone, fan worms, hermit crabs and delicate nudibranchs (sea-slugs). Fish include schools of Butterfly Perch, Silver Sweep and Long-Finned Pike, with Banded Morwongs common amongst the deeper boulders. 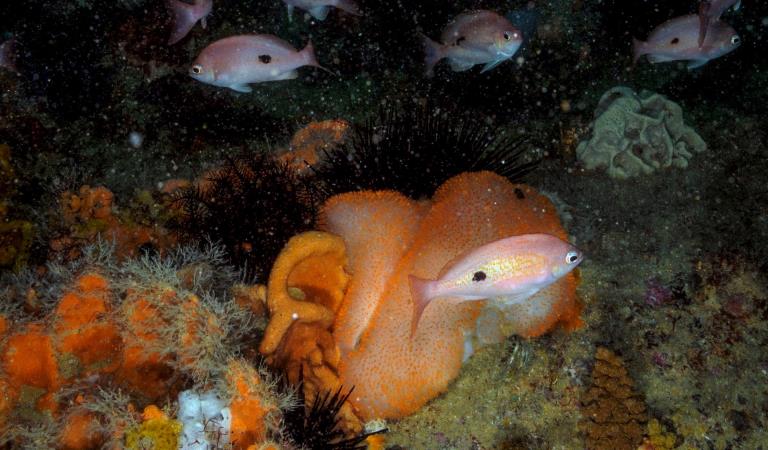 The clear waters off Point Hicks are ideal for snorkelling and diving with a rich and colourful marine life and an amazing diversity of fish. The park also contains the sites of two shipwrecks - the SS Kerangie, lost in 1879, and the SS Saros, lost in 1937. 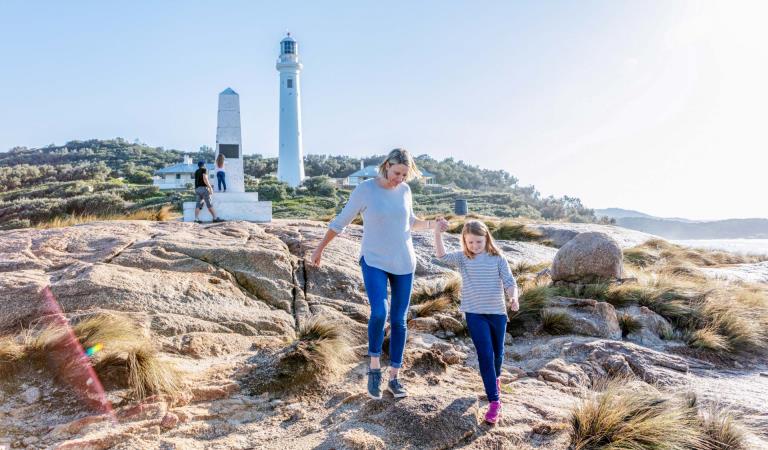 The Point Hicks Lighthouse Reserve and two camping areas, at the mouths of the Thurra and Mueller Rivers east of the park, provide a launching point to explore the park and adjacent Croajingolong National Park. Stop by at the Visitor Information Centre at Cann River or Parks Victoria Office in Mallacoota.

Summer is a wonderful time to visit Point Hicks Marine National Park for snorkelling and SCUBA diving by trained and experienced divers.

With warm sunny days and far fewer visitors, autumn is a wonderful time for a beach walk along the shoreline of  Point Hicks Marine National Park.

Lookout for passing whales from the Point Hicks Lighthouse.

With flourishing spring surroundings, walking along the beach is always a great way to soak in the nature at Point Hicks.

Cape Howe Marine National Park  is one of the most remote parts of Victoria and visitors to the area should be fully prepared for all possible conditions. Beware of sudden changes in weather, strong currents, and changing sea conditions when in the park. Always consult tide charts before going boating. When boating, always let someone know before you go, including an estimated time of arrival. Beware of sudden changes in weather, especially when boating on open water.

SCUBA Diving should only be undertaken by trained and experienced divers with local knowledge. Beware of strong currents and undertows when snorkelling or diving.

The management plan for Point Hicks Marine National Park directs management for the park until it is reviewed.