The Grampians Peaks Trail (GPT) project is a 160km, world-class natural and cultural walking experience that was opened in November 2021.

Showcasing the stunning Grampians (Gariwerd) National Park, the trail connects the park’s spectacular peaks, from the massive sandstone outcrops around Mount Zero in the north to Mount Abrupt in the south.

To cater for a wide range of visitors looking for new experiences, including those who may be unable or prefer not to carry provisions for a multi-day hike, Parks Victoria has engaged tour operators to provide facilitated walks on the trail’s northern section.

The facilitated walking experience makes use of three demountable huts at the Gar (Mount Difficult) and Werdug (Lake Wartook) hike-in campgrounds. Built and owned by Parks Victoria, the four-bed huts have a minimalist design developed for the Gariwerd landscape.

Project benefits
• The trail brings opportunities well beyond the walk itself, with the trail being an important economic and tourism development opportunity for the local community, the region and Victoria as a key nature-based tourism destination.
• The trail showcases one of Victoria’s most significant environmental and cultural landscapes, providing visitors with an experience rich in the Aboriginal culture of the Jadawadjali and Djab Wurrung peoples, who have lived in these ranges for thousands of years.
• By 2025, up to 34,000 walkers are set to experience the wonders of the national park, generating more than $6 million of economic benefit and tourism development opportunities for the region. 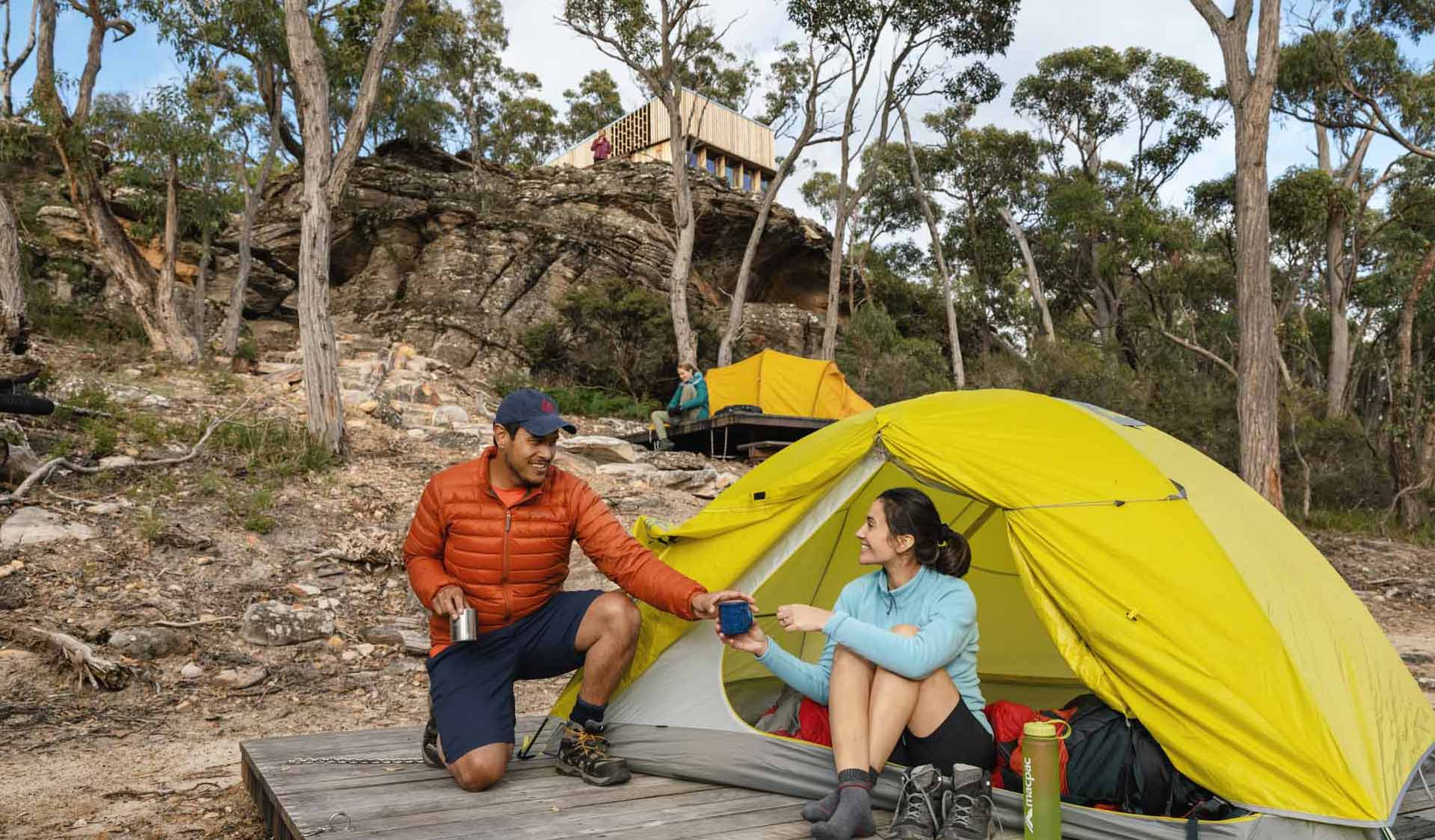 Who we worked with

Relevant government departments such as Regional Development Victoria and Department, of Environment, Land, Water and Planning were key contributors to the project.

Parks Victoria undertook significant stakeholder, community and Traditional Owner consultation on the design and implementation of the Trail.

The original idea for a trail linking the Grampians (Gariwerd) National Park from north to south has been decades in the making. It took a significant step forward in 2014 with the development of a Master Plan for the trail.

In 2015, Stage One of the Trail opened around Halls Gap. Since then, the region has seen a 35% uplift in overnight visitation (up until pre-COVID impacts), making the Grampians (Gariwerd) National Park one of the most popular nature destinations in the state.

With the completion of the remaining trail and facilities in November 2021, visitors can now enjoy this spectacular experience.

Environmental and cultural heritage management
Building a trail of this scale in a national park was complex and required detailed site planning to ensure the natural and Aboriginal cultural values of the Grampians (Gariwerd) National Park continue to be protected and conserved.

The alignment of the track was mapped out in partnership with Traditional Owners and conservation scientists and complies with all necessary environmental and cultural heritage assessments.

The hike-in huts for the Gar and Werdug campgrounds are demountable and were designed to minimise fire and environmental impact, with a similar footprint to the tent pads and no cooking or heating facilities. People staying in the huts as part of a facilitated walk share toilets and the shelter with all users.